There are times when connecting two electronic systems can be dangerous!  An electrical issue in one system can back feed into the other causing significant damage.  This can be prevented by the use of an isolation circuit.  Using a unity gain amplifier will provide this isolation.  This is a great extra step to Turning a Smart Phone into a Signal Generator.  Rather than risking damage to the smart phone head phone jack, worst case the isolation operational amplifier will be damaged.

Below is an example unity gain amplifier circuit.  This circuit can be built will any standard operational amplifier.  Check your local Radio Shack or Digikey for the one best suited to your application. 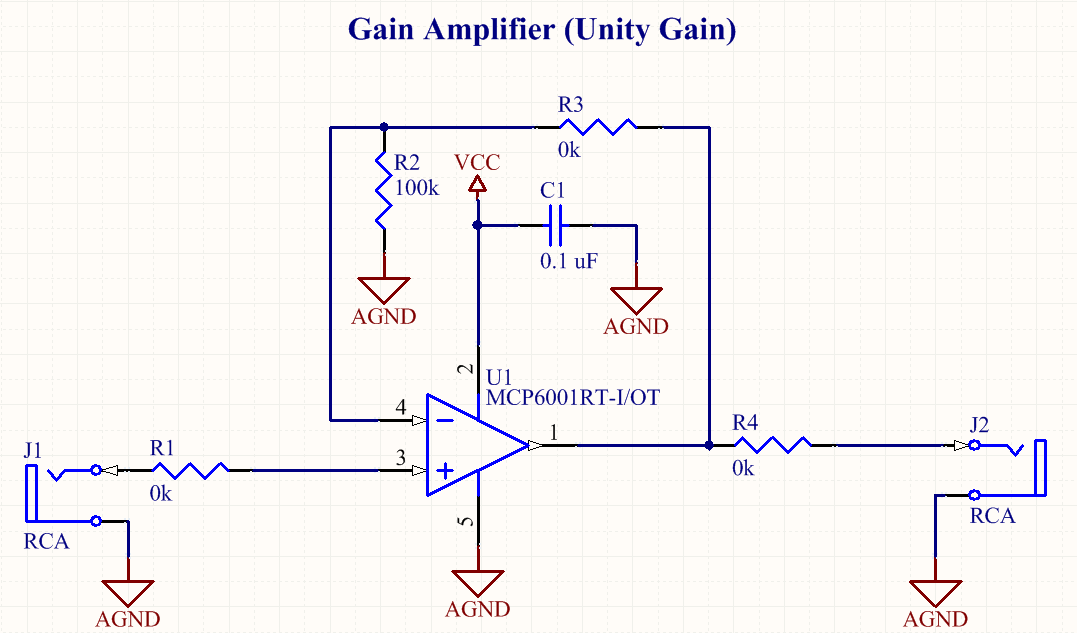 On either side of this circuit are some type of connector whether they are RCA, Audio 3.5 mm jacks or BNC.  The choice is up to the builder.  Moving in from the connectors there are resistors R1 and R4 which are zero ohm resistors.  These have been placed here for if connectors are bypassed all together and the circuit is built into another device.  The zero ohm reisistors are handy to remove to isolate the subsystems to perform individual measurements and debug the circuits.  They can be simply wire in a bread board.  Once again it is up to the builder.

The remainder of the circuit is for a standard non-inverting amplifier.  The gain of the circuit is G = 1 + R3 / R2.  Since the goal is for this circuit to have a gain of 1, R3 should be equal to 0 ohms.  With this being the case R2 isn’t even needed in the circuit!  However, both R3 and R2 have been included in the event that the builder wants to add gain to the output of the signal generator circuit.  Finally, C1 is used as a bypass capacitor to limit noise on the power line.

Building an isolation circuit is straight forward for the signal generator adapter and the best part is that this can be used for many applications!  Just don’t forget that you’ll have to power the operational amplifier in some way!