One of the biggest impediments to delivering embedded software in a timely manner is the codes structural quality. Code quality in a project often starts okay but quickly deteriorates as teams rush to implement features as promptly as possible. Take, for example, two teams:

At the start of the project, Team A appears to be the heroes. They quickly implement and deliver features, outpacing Team B. Unfortunately, Team A’s low structural code quality quickly gets in the way of them delivering additional features. Each new feature starts to take more time and herculean efforts to implement. As a result, team A stagnates as they become bogged down in massive debugging activities every time a new feature is added.

Team B, on the other hand, while appearing to start slow, makes steady progress. Over time, they spend less time debugging and fighting with their code structure. They eventually reach a point where productivity and cost inflection compared to Team A. Team B continues forward, creating new features, which results in a feature gap between the two teams.

You want your team to perform like Team B, not Team A. Evaluating your code quality can and should be done throughout your development process. Here are three tips for evaluating your embedded software code quality.

A feature of high structural code quality is high cohesion and low coupling software. Cohesion refers to the degree to which the elements inside a module belong together. High cohesion means that everything in the module supports the function that the module serves in the software and nothing more. For example, a USART module is not also going to support CRC. While a CRC might be used on serial data passed to the USART peripheral, calculating the CRC does not belong in the USART module.

Coupling is the degree of interdependence between software modules; a measure of the closely connected two modules. The higher the coupling between modules, the greater the dependence. In software with high structural quality, the software modules have a minimal number of dependencies. Low coupling is an indicator of high structural quality. The tighter modules are coupled, the more a change in one module will affect another. If a team is not careful, their software structure can turn into a “big ball of mud”.

The Big Ball of Mud 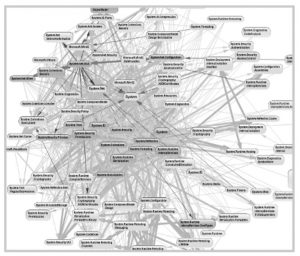 Notice that modules have dependencies that sprawl throughout the entire architecture. If you were to pick a module and try to update it or reuse it, a nightmare would ensue. It would be nearly impossible. Attempting to add new features to software like this is possible but often time-consuming and costly.

Embedded software teams should analyze their software architecture and dependencies as they develop their software. If they do so, they can identify potential coupling issues early and resolve them before they evolve into a problem. For example, I had a project I was working on where I wrote a task that controls a pump. As I wrote the code, I analyzed its dependencies which you can see below: 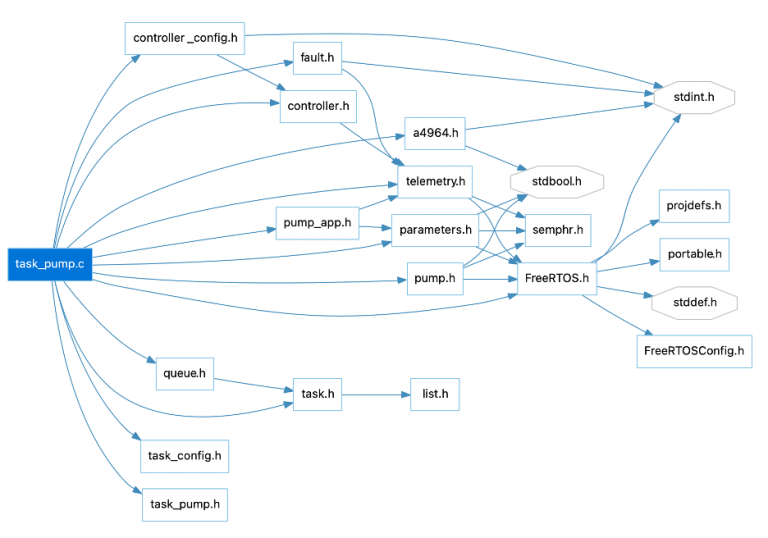 Best Practice: Monitor your code dependencies as you implement your embedded software. If coupling increases, refactor and evolve your architecture. The result will be clean architecture. Click To Tweet

A simple technique that can be used to estimate code quality is to measure the length of each function in your code base. Large functions have a statistically higher probability that they contain bugs. In many instances, a long function indicates that the function is not adhering to the Single Responsibility Principle (SRP)! Each function should do just one thing and be responsible for doing just one thing. (Note: This principle is often applied at the class or module level, but in C, it can be applied at the function level as well).

Large functions often do too much, indicating an underlying issue with the code quality. Analyzing the code can point to potential problems. For example, in the graphs below, you can see the largest functions and files in an example code base. The most significant function in the code has over 5,000 lines of code (LOC)! On the flip side, there is a module with nearly 18,000 LOC!

The LOC per function metric can identify modules where issues may live when analyzing a code base. When such code is identified, they are high-priority functions, files, and modules to refactor and break up into more meaningful units. For example, a 5,000-line function could likely be broken up into 50 helper functions that are clearer and more maintainable. Unfortunately, large functions like that are often nearly impossible to test!

Best Practice: A function should be no more than 50 – 100 lines of code. Anything longer and the function is most likely doing too much! Click To Tweet

Tip #3 – Every Code Unit should have Tests

When I review code for quality, one of the first things I do is examine the tests or lack thereof. A trick can be used to determine if you have enough tests for your software. Cyclomatic Complexity tells a developer the number of linearly independent paths through a function. Developers can use tools like pmccabe to measure every function in their code. Then, sum up the total, which will tell you the minimum number of test cases you should have to test your code.

I had a customer who had written a piece of software with which they were having many problems. They had gone a year late delivering and had spent far more on the product than they anticipated. The first step in the redesign was for me to review what was there, the quality and if there was anything that could be salvaged. A quick analysis revealed that they need ~9,000 tests to verify their function behavior. They had none. It explained why they were so late, over budget, and stuck with a giant ball of mud.

Structural code quality can be linked to whether a team can deliver its software on time and within budget. High structural code quality will result in consistent feature deliveries. Achieving high structural code quality is not something that just happens. Teams must set up the processes and procedures to evaluate and monitor their software. Quality issues are easier to handle as they occur rather than waiting until the end of a project when the easiest thing to do is just start over. (Which usually results in the same problems all over again).

In today’s post, we explored three low-hanging tips for how to measure the quality of your code. These tips include:

If you start with these, you’ll be on your way to understanding the defects and potential issues in your embedded software. Once you can see and understand, only then can you develop your action plan to improve your software structure quality.

If you know you have quality and embedded software development issues, you don’t have to go it alone. Contact me at jacob@beningo.com, and we can discuss how best to get you and your team back on track to delivering high-quality embedded software.

4 thoughts on “3 Tips for Evaluating your Codes Quality”