Below is an example of how a header guard might look for a file named button. 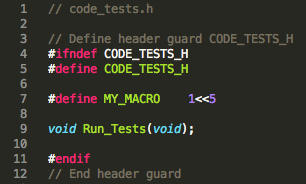 In the event that a header is included twice, the preprocessor check will see that the macro associated with the header has already been defined and will not once again include the header file.  A common practice is to define a macro that is the name of the file with an underscore being used to separate any white space and the file extension.