The tools that embedded software developers use are extremely important to maximize development efficiency and minimize costs, time-to-market and perhaps most importantly, developer headaches. There are a lot of great tools and toolchains available to developers today, the one that has been catching my attention lately, and the one we will be exploring in this post, is the Renesas Synergy(TM) Configurator. 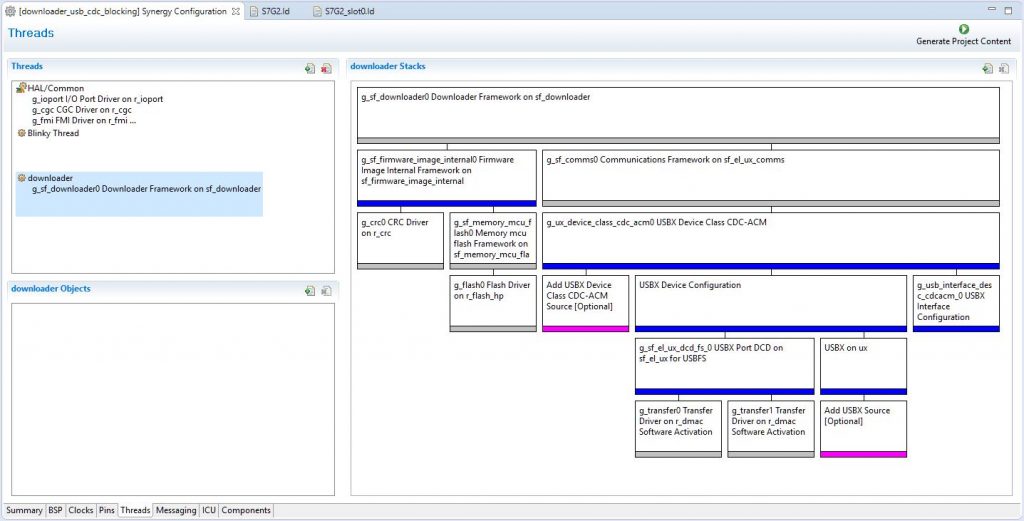 The threads tab within the Synergy Configurator provide developers with the most revolutionary configuration tools. The Synergy Platform includes qualified microcontroller drivers and frameworks that can be added to the project through the configurator. In the example image above, on the right hand side, the software stack represents the downloader application that is associated with a flashloader solution. Simply clicking on a software stack reveals a properties tab that allows developers to customize the stack for their application needs. The Synergy Configurator dramatically decreases software complexity along with time to market and costs. Once a software stack has been added to the application, developers need to only call the open() API in their code and then they have access to all the frameworks APIs.

Beyond just adding drivers and frameworks to the application, the Synergy Configurator also simplifies using an RTOS. Synergy includes the ThreadX RTOS from Express Logix. From the Synergy Configurator, developers can add and remove threads to the application and then add their software stacks. The configurator goes beyond just creating tasks though. Developers can create semaphores, mutexes, message queues and also event flags. There is even a mechanism known as the messaging framework which allows information to be easily passed around the application.

The way that developers configure and implement software on their microcontrollers is changing. Using a configurator like the Renesas Synergy Configurator is an example of the cutting edge and what developers can expect to see in the years to come. Developers interested in trying out the toolchain can download the ISDE, SSP and associated tools here.