Nearly every product requires a software update at some point or another. Whether it’s our cellphones, TV’s or even our refrigerators (yea I went there). Microcontroller based systems typically aren’t running a high-level operating system that allows files to be replaced. Instead, developers need a bootloader. Microcontroller vendors have been including firmware update capabilities inside their silicon for quite some time. In this post, I’m going to talk about the DFU Utility which can be used to update STM32 microcontrollers (along with a select few other microcontrollers). I have found this utility to be very useful when modifying and deploying updates to the Micro Python kernel.

STM32 microcontrollers include a firmware update application built into the ROM. Developers can gain access to the utility by pulling BOOT0 high during the boot process. At that point, the microcontroller will be ready to accept new application code. 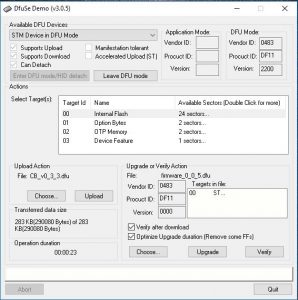 The utility will automatically detect when a device in the bootloader mode has been connected to the PC via USB. If multiple devices have been selected, the dropdown can be used to select the desired device. On the upper right, information about the microcontroller is displayed.