On a weekly basis, I receive a fair number of emails with questions about how to design embedded systems. One question that seems to be asked more frequently than others is how to write a configurable driver that uses callbacks with interrupts. If a developer is writing a driver that will be reused in multiple applications, the interrupt is usually compiled into the driver so the only way to make the interrupt handler flexible is to use a callback but how exactly is that done? In today’s post, we are going to dive into exactly how to do this. 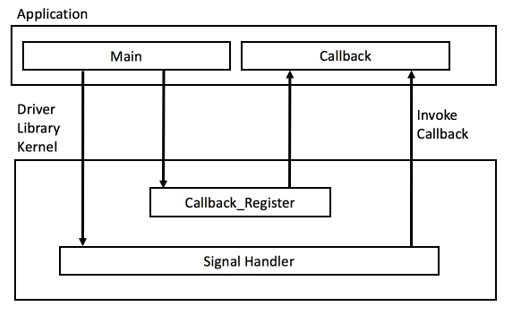 In order to understand what we need to do with the callback and interrupt, it’s useful to look at an example. Let’s say that we have a UART or USART that will be reused in multiple applications. We define a hardware abstraction layer for the basic functions so that we can decouple the driver code from the application code. The interface might look something like the following:

Within the UART driver, there may be several different interrupts that are defined. For example, one interrupt handlers may be:

We would normally fill this interrupt with application code such as:

This code though is application specific and we want to assign what the interrupt does at runtime.

Instead, we can setup our interrupt handler as follows:

The function that is assigned to the function pointer is set at runtime using the following HAL function:

We can define a callback function for the application using the following as an example:

The system initialization code then makes the following call to assign the function to the function pointer that is executed in the interrupt service handler:

Having an API that can be called to change the function that is executed by the interrupt may seem dangerous or could be a security vulnerability. An alternative to having an API assignment is to instead use a configuration table to initialize the function pointer at compile time. You’ll notice that the Uart_Init function has the form:

A configuration table could be used to assign the function that is executed. The advantages here are multifold such as:

There are certainly several different ways that this can be done, but the idea is to make it so that the driver code is constant, unchanging and could even be provided as a precompiled library. The application code can then still easily change the interrupt behavior without having to see the implementation details.

As we have seen in today’s post, callbacks can be used to easily create interrupt service routines that are flexible and scalable. We have seen that there are several methods that developers can use to employ callbacks in this way. My personal preference is to statically assign the callback so that it cannot be changed at runtime, but dynamic assignment can be useful for applications where the interrupt behavior may need to change during execution.

10 thoughts on “Using Callbacks with Interrupts”