Now that Arm TechCon has come to a close, I’ve had the opportunity to think back on the conference on the major themes that I saw through-out the talks and show floor. The conference once again appeared to be growing and the keynote talks were all standing room as can be seen in the image below: 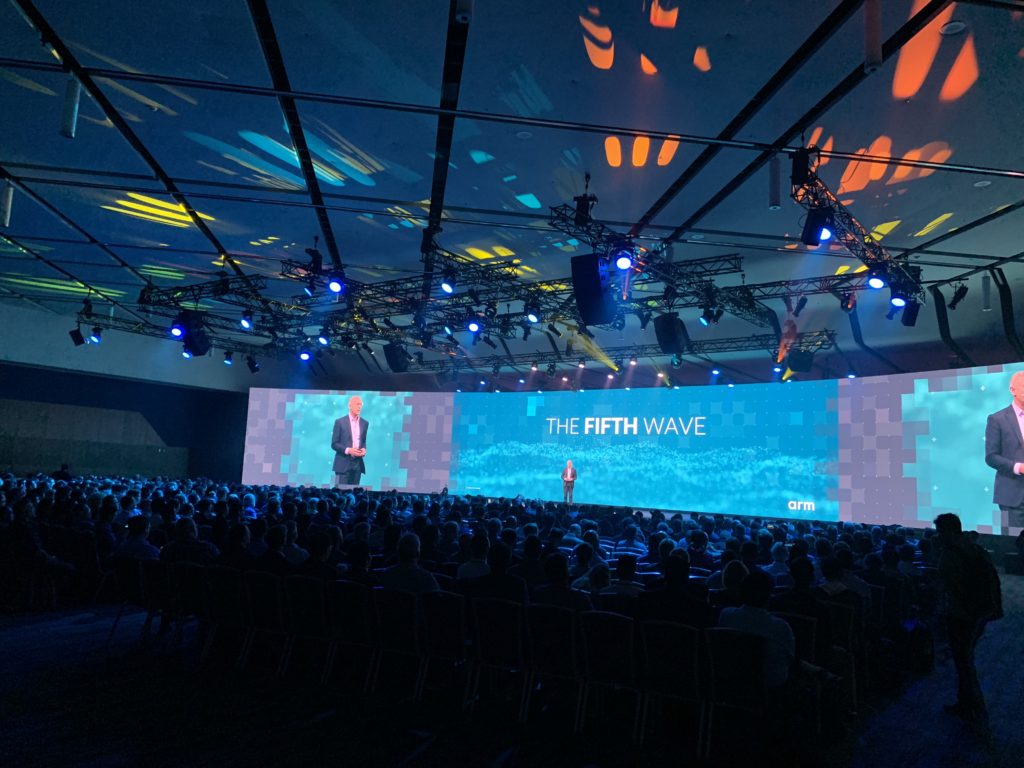 In this post, I’ll walk you through the five major take-a-ways that I walked away with. (Although there was so much more going on!).

In the first keynote speech for the conference, given by Arm CEO Simon Segars, focused on the fifth wave of computing and how it is affecting the way that we design systems. The best way for me to summarize is to list the different waves:

The fifth way involves the fact that we are now designing systems specifically based on the data that we can generate and use from those systems. We all know that data is where the money is and many companies will give products away for free as long as they can have the data that we generate. The challenges in this era of computing all revolve around the data:

Take-a-way #2 – The push for a trillion devices

Another major theme that was discussed at this year’s TechCon, and also at last years, was that within the next 15 years, arm expects there to be over a trillion IoT devices connected to the web. The main question here is how to support all these devices? There are many problems that developers are going to grapple with such as:

Arm is working internally and with partners to develop solutions that should help developers create the connected future.

While I was attending the conference, I was happy to learn the security extension to the Armv8-M architecture was starting to gain steam. There were two new announcements about microcontrollers that would be supporting TrustZone and going into production next year. First, ST Microelectronics announced their STM32L5 series and then NXP announced their LPC556x series processors. Both are based on the Arm on the Cortex-M33.These companies are now joining the existing offerings from Microchip and Nuvoton which went into production around the end of summer. It will be interesting to review their implementation!

Take-a-way #4 – Machine learning is a hot

While at the conference, I was surprised to find that there were quite a few talks around machine learning. These talks didn’t just focus on high-end processors but bled into the Arm Cortex-M processors as well. I gave one of the talks but was surprised to discover that IAR was giving a talk on optimizing machine learning algorithms and that MathWorks was putting on a hands-on workshop that covered machine learning. This is obviously a topic that a lot of companies have an interest in and it will be interesting to see how it progresses over the next year. Developers will want to watch this area closely.

There were a lot of really cool products and demonstrations on display. Boston Dynamics had one of their robot dogs that they were showing off. It was really cool, and you can find the find posted on my website here. I also saw that Keil was working on more integration with test automation flows and that they were using Python to do it! This makes it really easy for non-software developers to still develop test scripts whether they are working with just a model or production hardware. Automated testing for embedded systems is also being supported by the ULINKplus which can now be used for testing hardware during nightly build tests.

This year’s Arm TechCon was once again filled with great talks and demonstrations. These are just a few highlights that stuck out in my mind but there was so much to do and see that I know I’m overlooking some worthy highlights. Unfortunately, due a schedule conflict I was not able to attend the entire event but am already looking forward to attending next year!