A common question that I often receive is “What McCabe Cyclomatic Complexity tools should I use?” Now this is always a partially loaded question because while there are quite a few out there that I really like, most developers are really asking what free tools I can recommend to them. One of my favorite ones that I’ve been using that is free, open source and completely command line based is pmccabe.

pmccabe is a cyclomatic complexity measurement tool that has been used by Hewlett Packard all the way back since the early 1990’s for C and C++ code. The tool is ran from a command line in Linux or MacOS (or could possibly be ran on Windows from Cygwin but I have not attempted this).  First though it needs to be installed using either of the following command lines based on the operating system used:

Once the cyclomatic complexity tool is installed, running a file through the tool is as simple as navigating to the directory with your source and typing:

Now for a quick example in today’s post, let’s look at a communication decoding state machine file that I often use. The file is named packet.c so we can use the following command to measurement the cyclomatic complexity:

Now I’m using the -v switch so that the tool will print the column headers so that I know what each column means. The result would look something like the following: 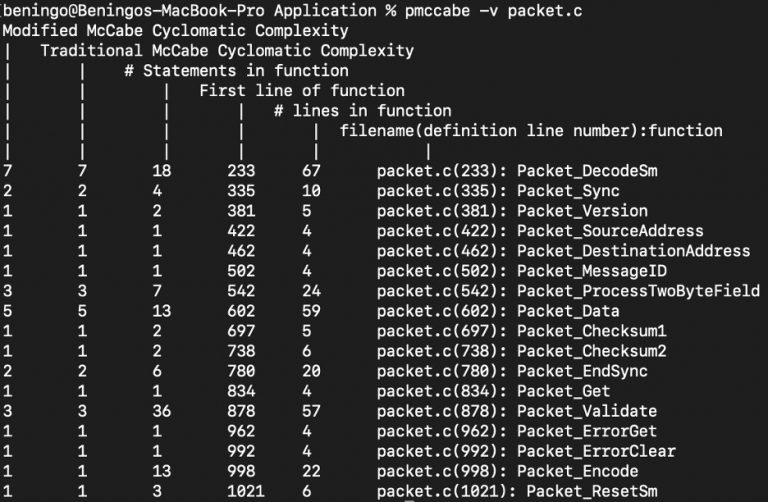 As we can see, I followed good programming practices and kept all my functions below a cyclomatic complexity of 10.

One thing that I really like about this tool is that it can be easily integrated into a Linux based build server and doesn’t require much from a scripting standpoint to run the tests, and then parse them for results. In most instances I only want to see which functions in a code base have complexities greater than 10 and I often want to display them in groups from 11 – 20, 21 – 30, 31 – 40 and 40+.

With how easy this tool is to use and the fact that it is open source, developers really don’t have an excuse to not monitor how complex their software is becoming. (Even on Windows, you can install Ubuntu on a Virtual Box VM to run it alongside a test harness.) So if you are looking for a great tool for cyclomatic complexity, this one might just do the trick for you.