One of the great things about working as a consultant is that most of the time the project can be worked on from the comfort of a home office.  There are always times though when it is necessary to work on-site with a client and one of the things that I’ve found is that a surprisingly large number of companies don’t have the basic and fundamental tools required to develop an embedded system.

A few years ago I picked up an OWON portable oscilloscope that can be seen depicted below.  This 2 channel oscilloscope has turned out to be quite the traveling companion!  Depending on the version purchased, these devices usually go for about $500 brand new and provide around 100 MHz bandwidth which is perfect for most applications! 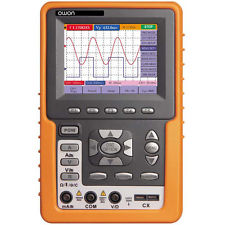 One of the advantages of this portable scope besides its size and ability to operate for long periods on battery is that it also contains a multimeter!  So there is no need to bring a second piece of equipment!  It contains all of the usual settings you would expect to find in a multimeter such as AC/DC current and voltage along with 20 amp and 10 mA current settings.

I’ve found that this device is also pretty robust.  While working during a crunch period I once accidentally tried to measure the current through a direct short on a milliamp setting!  It had been an extremely long day and I recall that it was around 3 a.m.  The meter started to billow smoke quite profusely along with the fuse popping!  I was concerned that my meter had just become an paperweight!  After a quick fuse swap and some measurement comparisons later I discovered that despite the character aroma of warm electronics that now follow the meter it still performs to spec!

No matter whether you select an OWON scope or one of the various other models out there, it is always a good idea to keep a portable scope/multimeter handy for those debugging sessions away from the desk or office.